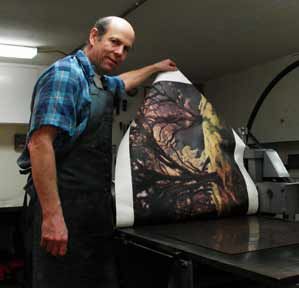 Throughout his life, Steve McMillan has been inspired and sustained by the natural world and has spent much of his time outside. Whether it’s a bike ride in the Northwest countryside, or a week long backpacking trip in the High Sierra, he is renewed and invigorated by being in and moving through landscape. It is this sense of renewal that he seeks to share with others through his art.

Born in Berkeley, California on December 21, 1949, he was raised in a home that had a sweeping view of the San Francisco Bay. This scene kindled his interest in landscape and was one of his earliest drawing subjects. He had his first one man show when he was sixteen.

Steve studied at the University of California, Santa Cruz and for one year at Hornsey College of Art in London, England where he concentrated on sculpture. It was at Santa Cruz in 1969 that Steve was first introduced to etching. Since he received his BFA from UCSC in 1975, he has focused on creating aquatint etchings of wilderness landscapes, drawn freehand from photographs he takes.

From 1975 to 1979 he work at Graphic Arts Workshop in San Francisco. For most of the years from 1979 to 1992 he was an artist in residence at Kala Institute in Berkeley, where he taught classes in printmaking and write three technical articles about aquatint etching. In 1992, he moved to Petaluma to set up his own studio. In 2006, he moved to Bellingham Washington where he now lives and works.