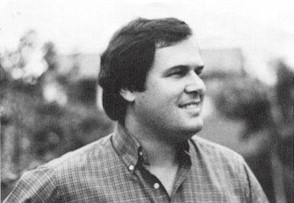 “My family had a cabin up in the Sierras very near Yosemite, and from the year I was born until I was ten years old, we spent every summer up there. My brother and I would sleep out on the porch – outside – and watch the bats fly in and out from under the chimney. You listened to the mountain lions scream occasionally, and you got up when the sun came up. Generally we’d been around the lake a couple of times, caught a bass or two, or a frog or snake, before breakfast. We put my Mom through a lot because we were fascinated with snakes and were always bringing them home. I was exposed to things as a child that hardly exist any more,” recollects California artist Dave Chapple. “It was this early exposure to nature, and especially to birds, that piqued my interest and prepared me for a career in wildlife art.”A bout with rheumatic fever meant that the ten year old boy was confined to bed for many months. During this time he dreamed of the days he’d spent in the Sierras and studied many bird books. He had already won several school sponsored art contests and decided to use the time to develop his natural artistic talent. The books and his pencil were his constant companions.Like most young boys, Chapple dreamed of participating again in sports but was not permitted to exercise strenuously because of the illness. Eventually, it occurred to him that kickers did little running, and he saw that as the solution to his problem.As in drawing, Chapple found that ‘practice makes perfect’ in punting. After an appearance in the Sugar Bowl as a college senior, he was drafted by the San Francisco 49rs. Later, he was acquired by the Los Angeles Rams, and in 1972,as an All-Pro Punter, led the league in punting and set an NFL record for the longest punt.During the off season, Chapple pursued his interest in the wild by studying taxidermy. He has first- hand knowledge of bird anatomy that few can claim. And today he holds state collecting permits as he continues to gather specimens for the Santa Barbara Natural History Museum.Chapple worked initially in colored pencil, charcoal and pen and ink. Soon he discovered the advantages of gouache, an opaque watercolor. It allowed him to capture the detail and exact color of each feather. Gradually his desire for perfection led him to include detailed backgrounds, and eventually he began to tell a story with each painting. Today, many are complete action scenes, but one can be sure that the birds are still detailed and scientifically accurate and the scene completely realistic.His love for fine line work and growing demand for his work led Chapple to explore etching as a medium. Beginning with single-plate, one color etchings, he eventually developed muiti-color pieces. Now he has the freedom to combine the single and multi-plate image with hand-tinting to achieve the same delicate style the is apparent in his painting. A punter who retired at the height of his career, Chapple made a conscious decision to pursue art with all the dedication and single-mindedness that football had taught him. Today he feels that the two careers demanded many of the same personal characteristics. “Both demand unusual self-discipline and self-confidence. Painting, like punting, means endless hours of solitude – working alone with perfection as the ultimate goal.” Although it is certain that he will continue to develop as an artist, one glance is enough to tell that he has indeed reached his goal.Chapple, who lives with his wife Nanci and their two children in Orange County, California, has been extremely active with Ducks Unlimited for several years and donates work annually for fund raising purposes. A three-time finalist in the California duck stamp contest,Chapple has accepted invitations to exhibit at the prestigious Leigh Yawkey Woodson Bird Art Show in Wausau, Wisconsin and at the Easton Waterfowl Festival in Maryland. He is recognized internationally as a fine, established wildlife artist, and his work is in continuing demand by private collectors, sportsmen, galleries and corporations alike.