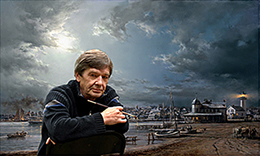 Dusan Kadlec, MFA, CSMA (born December 21, 1942) is a Canadian painter, born in Prague, Czechoslovakia (Czech Republic). He pursued his interest in art from a very early age, ultimately studying at the Academy of Fine Arts in Prague where he received a Masters Degree in 1967. His studies there covered twenty-two subjects, including bookbinding, paper making, drawing, painting, portraiture, as well as the more conventional subjects of history, political economics, languages, and math. His undergraduate and graduate training focused on traditional painting techniques but also explored aspects of sculpture, jewelry design, art restoration, and architecture. While a student at the academy, he specialized in figurative painting and portraiture. This European academic training is apparent in his painting style. The composition of his canvases reflects the tradition of the great European masters, and embodies the Romantic Classicism that is a nineteenth-century academic trademark.Upon graduation Kadlec began to exhibit and receive both private and state commissions. After completing his Masters, he was fortunate to be able to make a living as an artist in his homeland. Most of his early works were commercial art projects but he also contributed to a number of exhibitions, and was invited to participate in the design of Man and His World, the Czech pavilion at the 1967 World Expo in Montreal. The pavilion turned out to be one of the most popular exhibits at the fair and was a hit with both critics and crowds.Soon after the success of the Worlds Fair pavilion, political unrest began to affect life in Czechoslovakia. When the Soviet Union invaded during the Prague Spring revolution of 1968, Kadlec fled his homeland and immigrated to Canada, settling in Halifax, Nova Scotia. He immediately began to look for work as an artist, and within two weeks secured his first commission – a portrait. He found the historic charm of his newly adopted port city inspirational and began at that time what would subsequently become the focus of his life’s work. Re-creating maritime history on canvas. Critical acclaim and a number of highly successful one man and two man shows with such luminaries as Jack L. Gray helped propel Dusan’s early career and firmly establish him as a leading maritime artist.Since then he has continued painting in his old world style, gradually expanding his subject matter to include historic images from around the globe. After more than four decades in his field, Dusan’s work can now be found in numerous public, private, and corporate collections throughout the world – including the Burrichter/Kierlin Marine Art Collection (currently on loan to the Minnesota Marine Art Museum), which is considered one of America’s largest and finest privately owned marine art collections. The collection features other works by renowned masters such as Albert Bierstadt, William Bradford, Alfred Thompson Bricher, James Buttersworth, Jack L. Gray, Winslow Homer, Claude Monet, Thomas Hoyne, Camille Pissarro, Pierre-Auguste Renoir, Francis A. Silva, Samuel Walter and many others.Dusan Kadlec is recipient of the Maritime International Award of Excellence as well as the Rudolph J. Schaefer Maritime Heritage Award from Mystic Seaport Museum. An honor given to the artist whose work best documents and preserves America’s maritime heritage.Save