Eating Up The Lights

Travel by steamboat at night was very limited and rarely attempted. Hidden snags shifting sandbars, and dangerous currents were only a few of the ever-present obstacles to navigation. At night, all hazards were greatly magnified.  On occasion, pilots would find themselves only a few miles from the next landing after sundown. In order to navigate through any menacing areas, the crew would test and mark the waters using a technique they referred to as EATING UP THE LIGHTS.

A crew of men would board one of the steamboat’s skiffs and spearhead the attack on the uncharted waters ahead. The pilot would choose a knowledgeable associate to supervise the activities. He would also need several men with strong backs to provide propulsion, a man to take depth readings, and an individual to manipulate the lighted markers.

After this procedure was repeated a few times, a long procession of marker lights would highlight the safest path through an otherwise hazardous and unpredictable river. With confidence in his lead crew, the boat’s pilot would gently advance into darkness toward this path of lights. With fascinated passengers leaning over the rail of the forward boiler deck, the graceful steamer would glide over the floating markers, consuming their light under her bow. Thus she was EATING UP THE LIGHTS. 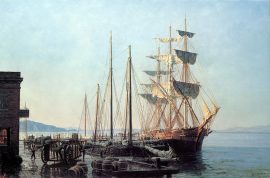