The inland waterway system was the main artery of commerce for the Confederacy. In order for the North to stop the dominant means of transportation for the South, the rivers had to be controlled. To accomplish this task a fleet of ironclad steamboats had to be designed and built. Many designs and builders were considered; and after much deliberation, James Buchanan Eads was selected to design and build seven ironclads. These vessels, combined with other rebuilt steamers, comprised the Union’s Western Flotilla.

The first tests for the newly built vessels came on the Tennessee and Cumberland Rivers in the battles of Fort Henry and Fort Donelson. Success was achieved; and, a great deal was learned about the fighting capabilities of the fleet.

The next big test began on March 17, 1862 at Island No. 10. The island was located at the bottom of a hard bend in the Mississippi River a mile or so above New Madrid, Missouri. Confederate troops on the island were dug in and heavily fortified. Their goal was to block and protect the river.

In “THE BATTLE OF ISLAND No. 10, 1862″ we are able to view an attack on the upper battery. The evening battle creates a brilliant display of firepower from the ironclads. To the right of the composition we see the mortar boats. This was the first use of the barge-like craft which was designed to serve as a firing platform for a 13” mortar. The mortar was perhaps as dangerous on one end as the other. The crew members can be seen outside the armored area on tiptoes with hands over ears, mouths agape, and knees flexed against the concussion. In the distance we see the Confederate guns returning fire. It is interesting to note that this is the first time for the ironclads to fight a downstream enemy. By looking closely you will note the anchor lines extending from the sterns of the ironclads. If disabled, the vessel would be at the mercy of the enemy because the current would carry the steamer and crew within yards of the cannons on the islands.

Little progress was made between March 17 and April 4. Because of the distance from which each side was firing, major damage could not be inflicted. In order to defeat the enemy, the Union had to get ground forces behind the Confederates island. One or two ironclads had to get past the heavy guns in order to ferry the Union troops located below New Madrid across the river and provide fire support.

Plans were made for the Carondelet to run past the batteries at night. On April 4, under a cover of darkness and during a violent thunderstorm, the task was accomplished.
After the fall of Island No. 10, the remainder of the South’s strongholds began to fall. By using Eads ironclads and other support vessels, the arteries of the commerce for the South were closed. 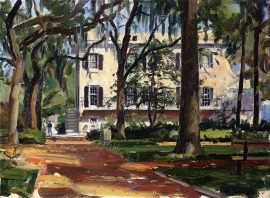