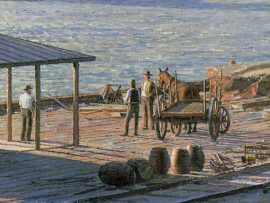 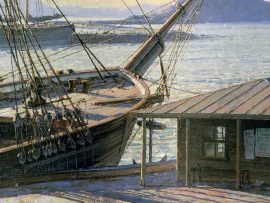 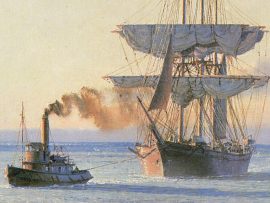 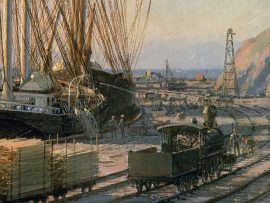 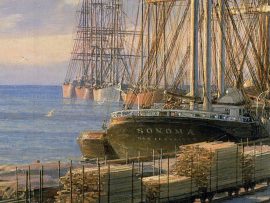 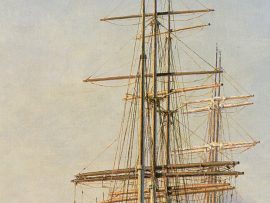 San Pedro Bay, the eventual site of Los Angeles harbor, appeared in the beginning to have nothing at all to recommend it. When the Portuguese navigator Juan Rodriguez Cabrillo first sighted the coastline on October 8, 1542, the spongy speck of land did not impress him. Cabrillo named the shallow bay “Bahia de los Fumos y Fuegos” (Bay of Smokes and Fires) because of the heavy pall of smoke from Indian grass fires that hung over the area.

For more than two centuries, San Pedro remained virtually deserted except for some occasional visits by Aleutians Indians. Then, in 1771, a Franciscan monk, Father Junipero Serra, established the Mission San Gabriel Archangel forty miles from San Pedro Bay. Shortly after, the monks began laboriously pulling their oxcarts, piled high with tallow and hides, over rugged land to the small harbor and thus initiated the first bit of trading at San Pedro.

Ten years later the Mexican governor of California conferred the status of cityhood on the small settlement of adobe huts and “The City of Our Lady, the Queen of the Angels,” Los Angeles, was born.

This view shows the bark Vidette, a 616-ton vessel built in Bath, Maine, in 1865, arriving at San Pedro with a cargo of lumber from Puget Sound. The Vidette enjoyed a long life after this voyage; she operated into the 1940s as a coal barge at Oakland, California.