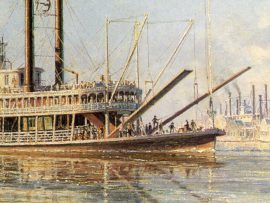 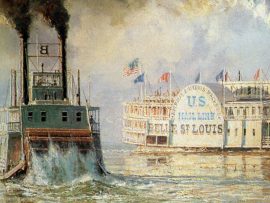 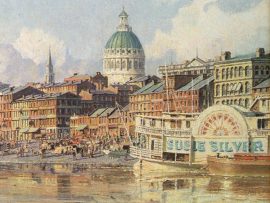 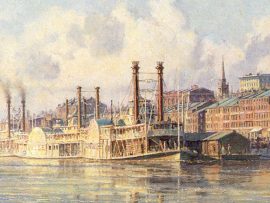 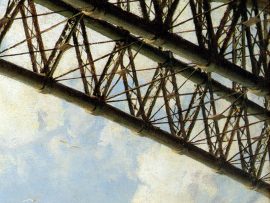 St. Louis, located on the Mississippi River below the mouth of the Missouri, guarded the entrance to the frontier. By reason of its geographical position, the city was destined from the beginning to become a major commercial center. Mountain men, fur trappers, explorers – they all gathered in St. Louis.

The first trading post was set up at the foot of what is now Market Street in 1764 by Pierre LaClede and even before 1800, pioneers were beginning to establish themselves in the plains of the Mississippi opposite St. Louis. After the War 1812, immigrants steamed into the area; at that time, barges, flatboats, and keelboats were used for trade and transportation.

The riverboat Independence initiated steam navigation on the Missouri River in May 1819; others soon followed, and by 1848, St. Louis claimed to be the third ranking port in the United States in terms on tonnage receipts. Only New York and New Orleans had more cargo traffic, but in the number of registered steamboats, St. Louis led every other city in the West.

The Gold Rush of 1849 proved to be a boon for the Missouri steamboat captains and for the pilots, who were often paid as much as two thousand dollars a month. The year 1858 set a record for steamboat arrivals in St. Louis; almost four thousand of them, including packet boats, side-wheelers, freight boats, and stern-wheelers. The 1860’s were the golden years of steamboating when St. Louis became know as the “Queen Port of the Mississippi Valley.” 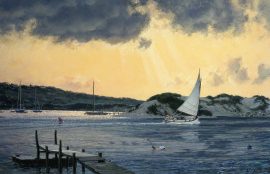