The first iron bridge across the Mississippi at St. Louis was built by James G. Eads in 1874. At the time, Eads already had a reputation for getting even the most difficult things done. He had previously invented a diving bell and had helped the Union secure control of the Mississippi during the Civil War by designing, building, and delivering armor-plated gunboats in just over two months time.

The year following the completion of the bridge, 1875, would see St. Louis’s population swell to half a million people, and the city was outranked only by New York and Philadelphia in the value of products manufactured.

St. Louis was named after King Louis XV’s patron saint. The Spanish acquired it in 1770, France got it back again in the time of Napoleon I, and the United states finally ended up with it in 1804 as a part of the Louisiana Purchase. This transfer to the United States meant that the mighty Mississippi River was no longer a barrier to American expansion, and a massive migration followed.

St. Louis grew rapidly into a bustling center of commercial activity during the last century, and today the city is the largest in Missouri. The ports of St. Louis and Chicago have many things in common, the most dramatic of which are spectacular fires. The Chicago conflagration was supposedly started by Mrs. O’Leary’s cow, but the St. Louis fire of 1849 began in a much more dramatic fashion.

It was kicked off by a minor boiler explosion aboard the steamboat White Cloud; the flames spread to the wharf and finally consumed about a third of the growing city. There were so many steamboats moored to the St. Louis pilings on the day of the fire that the first thought was to cut them loose. Axes flew and an armada of unloaded, unmanned steamboats drifted downstream with no power; the boilers were cold. But a few steamboats could not be cut loose in time and started to burn. Finally, the manila mooring lines went and these blazing infernos floated down the Mississippi, crashing into other steamboats. Flames leaped from one wooden riverboat to another and twenty -three vessels were destroyed in the fire. 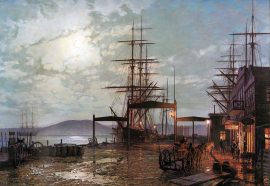